I have been challenged to write another blog (thanks Miss Terry

) so I might consider this more like one of those Christmas letters included in the Christmas Card documenting the previous years’ life.  However, this will only include November and December and WILL NOT be written in third person.

The month of November has found us scheduling weekly doctors’ appointments. We have been poked by phlebotomists, drilled by dentists, and examined by our favorite doctor, Dr. Rosalinda Nogales. Tom has been run through the CT machine and blown in the nebulizer. Now enough of the yucky medical stuff and on to the fun things we have been up to.

A bonus of visiting back in Fresno is having the grand boys visiting us after they come home from school. They talk about all they are learning and it is fun to hear and encourage this younger generation.  One of the biggest joy has been spending time with our number one (oldest) granddaughter. We have shopped, helped with Thanksgiving dinner, and shared cooking tips and recipes. I could write pages about the Facebook and texting exchanges we have; needless to say it fills my life with lots of laughter and pride in our self-proclaimed overachieving granddaughter.

Our Escapee friend, Margie Rogers, asked us over a year ago to place flowers on her mother, uncle and grandparents’ graves of we are near Tulare in November.  We planned this mission on the weekend of November 23rd.  There is a lot of early California history around the Visalia/Tulare area. We drove a short 40 miles to the Visalia Elks for the weekend to explore an area that we haven’t spent very much time visiting. Seems like it is the localities closest to your home town that you visit the least.

We bought flowers, went to the Dollar Store for 2 nice vases, and found the grave sites of Margie’s family. We had a lovely time looking around this very old cemetery. We even tried to find a geocache, but apparently the recent storm had either washed it away or buried it in mud. 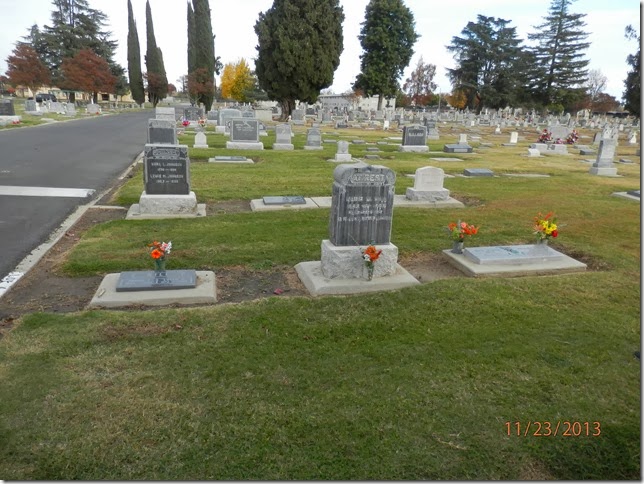 Tom had been researching the 1880’s history of Sontag and Evans, 2 train robbers active in the Visalia/Tulare area. Most interesting to us was the connection with the Southern Pacific Railroad as both our fathers and many relatives were engineers for this company. John Sontag went to work for the Southern Pacific Railroad.  He was eventually killed at the Stone Corral north east of Visalia. We found it on Google Earth. That’s it in the upper left side of the picture below. 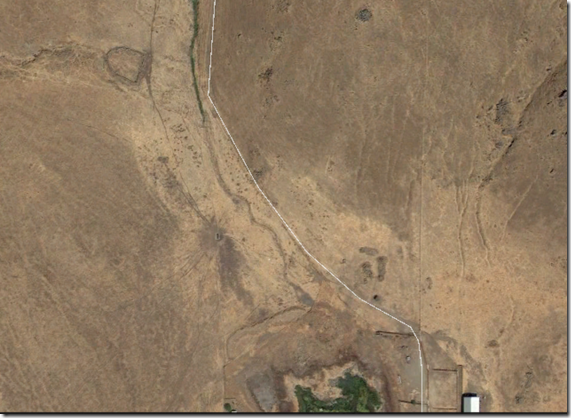 Unfortunately. the Stone Corral Ranch, located just below the the green area in the lower part of the the picture above, had a locked gate across the road and we were not able to drive up to the corral where this incident occurred. 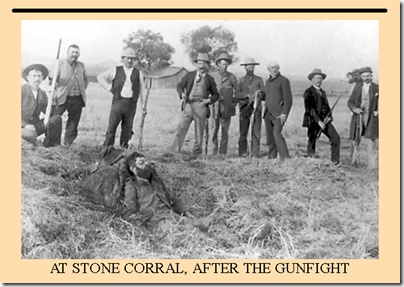 At first John Sontag looked with favor upon the railroad, after all, he was an employee of the Southern Pacific. However, when he was injured on the job in 1889, and was taken off the payroll, Sontag turned to a life of crime. For four years, he and his partner, Chris Evans, terrorized passenger trains in the central San Joaquin Valley. Finally the two men were cornered at Stone Corral near Visalia by a sheriff's posse. The result was that both robbers were badly wounded. On July 3rd Sontag (shown above, propped up on a mound of hay) died, and the next day was buried. Hiram Rapelje (second from the left) attended his funeral and eulogized the outlaw as a "brave man." Ironically, etched on Sontag's tombstone is a steaming locomotive. ~Fresno county historical society~

Another excursion was to the small town of Exeter to have dinner at Monet's, a tiny French restaurant recommended by our son, Jason, who is an Executive Chef. It was beyond delicious. Cauliflower soup, crab cakes, steak, lavender water, a decadent chocolate cake for desert… beyond delicious!

Another simply delicious event was Thanksgiving at our granddaughter, Julie’s. The turkey was stuffed with oranges, and drenched in beer. We had riced potatoes and gravy, stuffing, Mexican corn, the most delicious corn muffins made with creamed corn and honey, biscuits, and about 6 different kinds of pies.  We played Cranium until 2 o’clock in the morning and laughed until we cried.

Sandwiched in-between the doctor’s appointments, the holiday festivities and Christmas shopping, helping Mom buy then set up her new Windows 8 computer (I am so envious), I did manage to attend the 1960 Roosevelt High School girls’ Christmas luncheon. We had a great time telling stories when we were in high school. What a great group of girls! 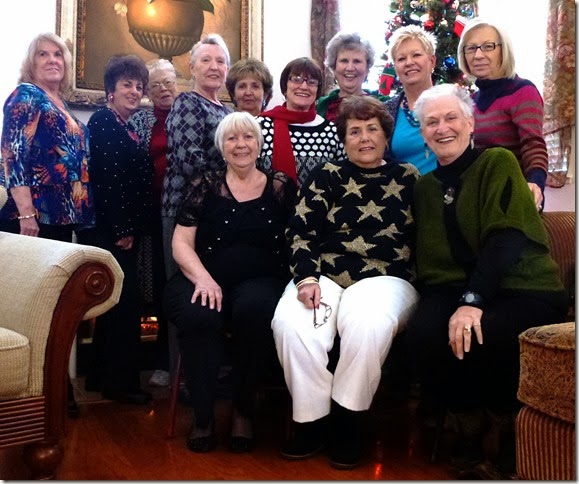 We look forward to a wonderful Christmas season. It is freezing cold in Fresno now. After the holidays, we will be joining our Golden Spike chapter at the FMCA Indio Rally. After that we are off to Q with the Boomers and the Geocachers.

If we do anything ‘exciting’, I’ll try to blog again before we leave California.

Posted by Barbara & Tom at 2:12 AM No comments: Links to this post