We finished the rally by cleaning up the large lot on the south side of Dr Carron Road with Anita Price and Luke Rinehimer.  There was no scrap of paper, cigarette butt or dead battery left after we finished.  Cool Judy had checked out the extended parking options while we tootled around in our golf cart filling our garbage bags, and then we moved to our new spaces.

While we were parked during the rally we noticed some water that was leaking into our bay.  There was no time to take care of it while the rally was going on so after the move we attacked the problem.  Tom pulled out the drawer in the bay and I crawled inside.  I was able to twist around, over the rail and into the ‘bowels’ of the rig where the water heater, and inverter are stored. (Why would Monaco put water sources that could leak right next to all the electrical equipment?)  I discovered the source of the leak, the gray ‘T’ fitting where it was screwed into the brass ‘T’ fitting. 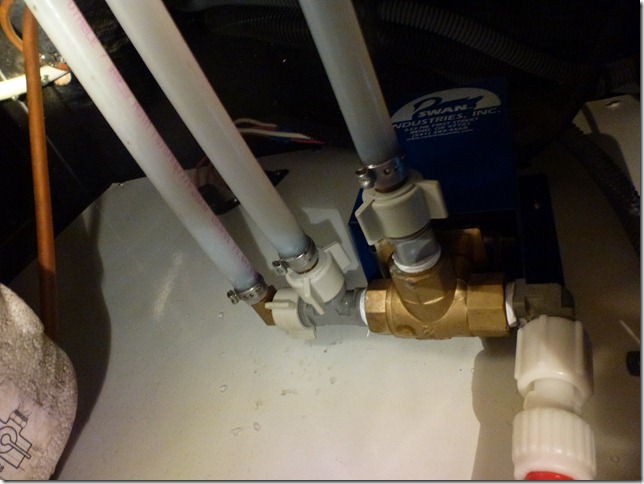 Now where can we get a replacement for the gray ‘T’?  Nope, Luke did not have a single ‘T’ that we can use.  So we all jumped into the Jeep and picked up a ‘T’ and a couple of nipples and went to the Fisherman’s restaurant for dinner.  Boy was that a good choice. The Chivichi was outstanding as was my fish tacos.  Everyone else was very happy with their choices too. 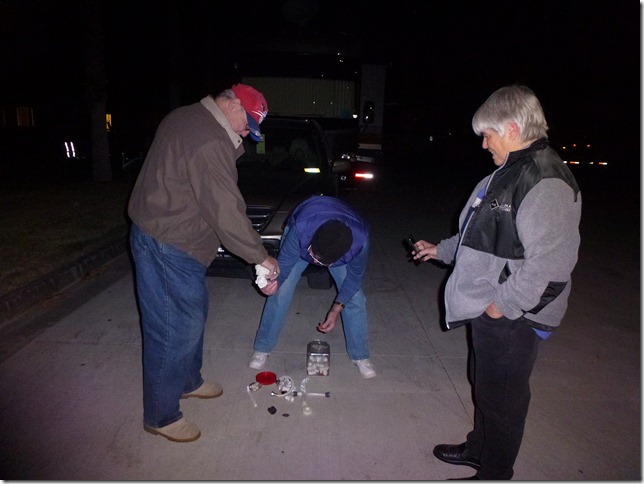 Later that evening I revisited the cave under the motorhome and installed the new ‘T’ with new nipples all wrapped with Teflon tape.  No leaks. Big bruise though. 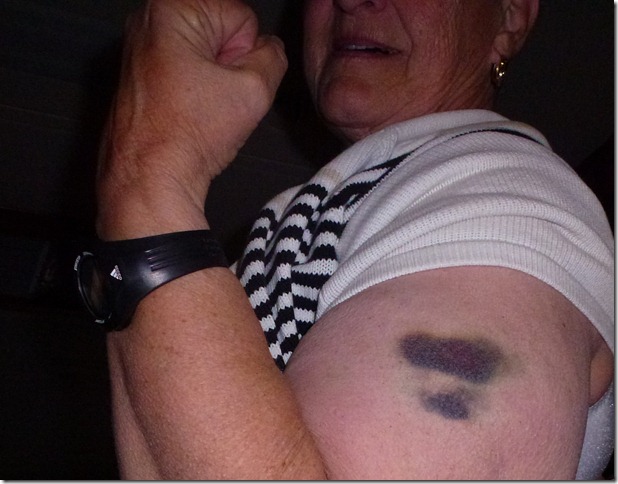 We left Indio for Quartzsite on Tuesday morning, and though a little windy, the trip was an easy one. 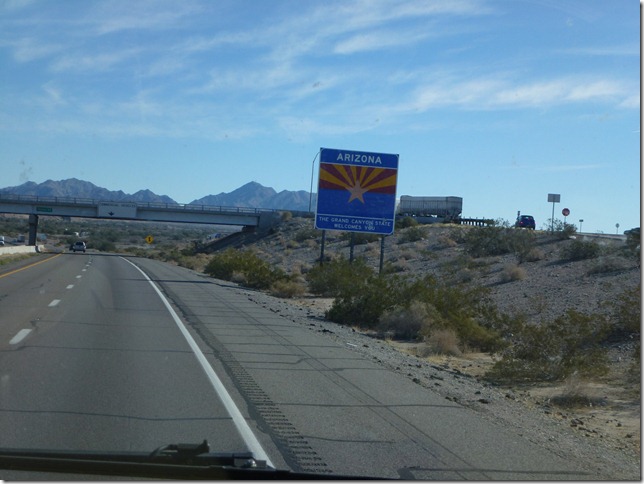 We are having some repairs made at Lifestyles RV in Q so we did not want to make the long drive on a rough dirt road over to Boomerville since we will be having the work done on the rig Friday. Things are starting to look pretty busy near the big tent. 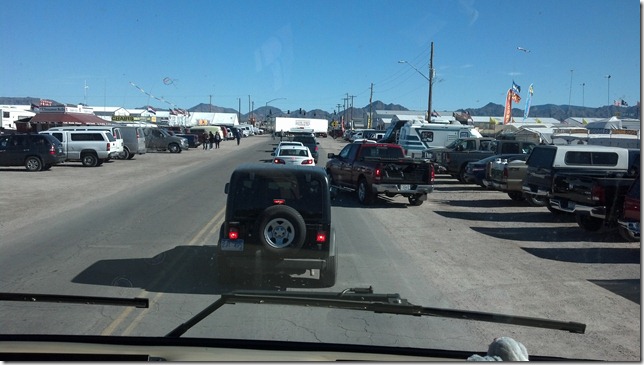 We drove up Hwy 95 for Propane at the Pit Stop then drove on to Plomosa Road and parked at a nice open area.  The view was nice as we watched RV’s move onto the BLM land.  We did notice another small leak in the bay and then during the cold night suddenly our heater sounded like a rock was spinning around inside of it.  It was VERY loud and we shut the heater off immediately. 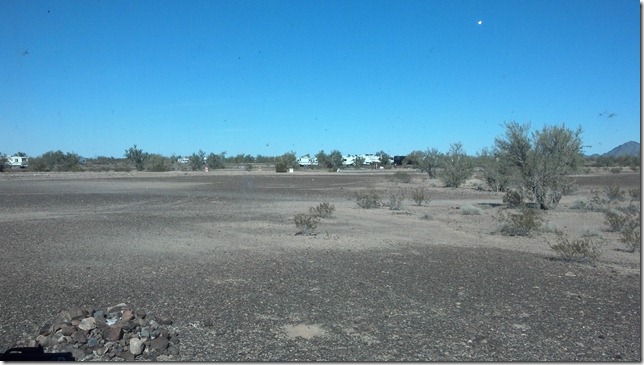 We had decided to move closer to Lifestyles RV for the repair and because it was closer to the Escapee Happy Hour and the Local Geocacher’s Event.

We drove west on Dome Rock then south on Cholla Road.  We entered the parking area and  Tom avoided the deep rut as we entered, but then things started to go south when we heard a scraping sound and the warning beepers started going off.  We pulled around to a flat spot and turned off the engine.  The warning lights indicated Low Air.  Tom walked out to the road and saw the deep groove in the pavement.  Back at the rig he checked the air bags – no damage.  He checked the tow bar.  The problem he found was a broken air connection at the tow bar.

OK, problem 1, AOTHER leak in the bay.  Problem 2 heater not working.  Problem 3 no air pressure, no brakes, no leveling.

Yup, I was back in the bay cave– this time the leak was from the pipe leading to to the water pump. I unscrewed the pipe, but the water kept flowing even though the pump was turned off.  It filled a pan 3 times! I had my finger in the pipe and felt like the little boy with his finger in the dike.  Tom discovered there was a siphon out of the fresh water tank and disconnected from there and we finally got the water stopped.

We left to drop off the flyers for the SKP Geocacher’s rally at the Escapee Happy Hour and then drove to Boomerville to drop off some there too. We were happy to see friends from last year even though we follow most on Facebook or Blogs, there is nothing like hugs in person.  Then to Hanks Hardware for an o-ring for the pipe and an easy-out and plug for the broken air pipe.  O-ring was installed and the water leak was fixed.  However the easy-out would not ease the broken piece of the brass pipe out of the housing, but Tom was able to unscrew the air hose from the back side of the tow housing.  We went back to Hanks and exchanged the plug for a cap. Back to the RV and the air leak was temporarily fixed.  We leveled up and pulled out the slides.

Next chore was to investigate the heater problem.  We had checked out how to remove the motor from the heater on the internet.  The internet is invaluable to finding out how to fix things that go wrong on the road. 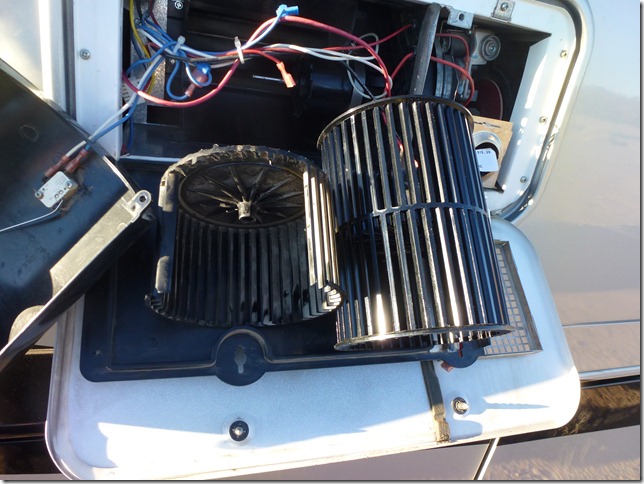 I got it all installed and even got a kiss for my pay from Mr. Westerfield!  So all in all it was a very productive day.  Tomorrow we will be manning Table G at the geocaching event and dinner with friends, Anne and Leroy Willis.  AHHHH, life is again good.

Love hearing your comments. I will delete all spam.